But wait a minute...reading Roberto Bolaño 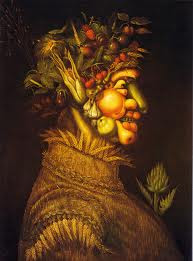 I first became acquainted with the work of Giuseppi Arcimboldo (Italian, 1527 - 1593) when I was a kid in Denver, Colorado.  For some reason the Denver Art Museum has his painting Summer in its collection.  I remembered it for its audaciousness and being a bit clever (at least to a 13 year old kid) and not so much for its interpretation of life.  Never-the-less, as I made my way through Bolaño's 2666, it became the icon of the novel for me.  There are some other helpful models, but I will save them for some future comments.  Arcimboldo didn't just fly into my consciousness for no reason at all, but rather is suggested by a central character in the novel.  The constructs of this painter, who takes distinct and discrete things - in this case vegetables, grains, and fruits, forms an entirely different and identifiable entity from these disparate elements.  While the observer can see the pear, he or she is also drawn to see the chin, and the face.  Reading Bolaño has a similar effect, with discrete parts have a wholeness and integrity on their own.  The "stories" that are knit into the whole of the work are like Arcimboldo's fruit and vegetables - an entity on their own, pleasing and complete, and yet a part of a greater dimension and whole.


2666 was intended to be published as five separate parts of an all-encompassing work.  At least this was Bolaño's intention - he thought it would provide a better income stream for his heirs following his (imminent) death.  The heirs, however, decided to publish it as a whole, and I am grateful that they did.  It is only at the end, however, that I was convinced, and indeed not a little bit minded, to pick up the novel at any point and have it make sense.  Well into the final segment, I smiled as I realized what was coming - that I was coming to the beginning again, or was it the middle?  Indeed - in the paragraph following my instincts were proven correct.  I wanted so much to have some kind of revelation at the end - and was worried that that might not happen, and was pleasantly surprised when it did.  The framework deemed to snap into place.  The details, however, are the subject of further work and rading.


The other image, or metaphor, that comes to my mind about this work is the Möbius Strip (having only one surface and one boundary component).  One can travel this surface, this single surface, and yet have the sensation of having been on many surfaces in many orientations.  With that thought in mind, I suspect I will want to revisit this novel frequently to interject my attentions to it at any point, and to make new connections and relationships.
There is another aspect to Bolaño's writing that I find attractive.  I have long been a fan of Umberto Eco, and find his ability to serve up the arcane and the unknown in a realistic environment that draws the reader in.  Bolaño writes in a similar fashion, or should I say, in a similar world - where everything is fascinating and everything has some kind of suasion on the action at hand.  (It is this style of writing that Dan Brown so wants to emulate and simply cannot handle).  At points I read either Bolaño or Eco with a computer at hand - looking up unusual references, places, or names.  The process of reading becomes an education well beyond the points of the stories.
When I was still teaching an Adult Group at Saint Francis Church in San Francisco, I loved going off on a tangent.  Such excursions always afforded additional learnings and points of view.  So it is with Bolaño.  The line (if indeed there is such a thing in his writing) is interrupted often and artfully with "tangential stories" complete within themselves that yet draw the reader through the experience of the novel - more Möbius and more Arcimboldo.  Reading this material makes one pause and wonder about bouquet, finish, mind or ear (as opposed to mouth) feel.  I guess that this work is Wagnerian in that it encompasses and displays so much - total novel, like unto total theatre.
To say anything more, I shall need to talk with others, and to write any more will require some revisiting the novel.  Let me, however, recommend it to you - all 893 pages.  It's quite addictive.  And now that I've cut my teeth on this, I may have to go back and have another try with Infinite Jest!
Posted by Michael T. Hiller at 7:01 PM No comments: