A Visit with Anna 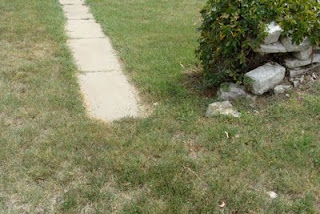 I am, for the first time in my life, alone in Alma, Kansas.  It is a small village some 40 miles west of Topeka the State Capitol, and is itself the county seat of Wabaunsee County, Kansas.  It is where my mother was born, and it is a place that we visited faithfully as children, journeying either from another part of Kansas, or Monte Vista, or Denver, Colorado, or from either Sante Fé, or Albuquerque, New Mexico.  We would come to see my grandmother, Augusta Ringel Terrass (Gusti), or my grandfather, William Terrass, staying in the home he built and eating the produce that my grandmother faithfully grew in the large lot next to and behind their home.  Visits there were always replete with aunts, uncles, cousins, great aunts and uncles, and other assorted relatives.  Alma was about people, family, and food.  Now I was here alone.  The sidewalk pictured above seem to represent my feeling about being here - a path, guided and certain that ends in freedom and something new.
I came over to Alma in the morning to have breakfast at "Deb's Cafe" (you don't want to know) which was filled with sun and wind-burned farmers have their "regular" and families entertaining a visiting family members from other parts - catching up on who had died and who was sick.  I thought back on our own gatherings at this cafe at my Aunt Lola's funeral, and somewhat later at my Uncle Edgar's funeral as well.  We would have been doing the same thing.  Catching up, hearing intimate news.
I wanted to wander around the business area, looking at the wonderful stonework, largely fashioned from the native limestone that lurks just below the rocky soil that covers the hills here.
St. John's Lutheran Church would be an important visit as well, filled with memories of earlier visits and of my own mother's history here.  There were the windows that fascinated me as a child, when I looked at the semicircle of orange in the arch of each window and imagined that it was an orange.  Or there was the organ chamber that my father would open up and lift us into - playing "Ein feste Burg" as loudly as possible.  We loved it.  I remember especially the fans that were given out in the summer time - which would open up into a full representation of the Last Supper or the Good Shepherd.  None were in evidence this morning.  The mechanical carillon rang out the quarter hour as I left Saint John's and walked over to the adjoining Holy Family Catholic Church, smaller, but older, and built with the same stone.  It was locked.
I walked across the street to look at the courthouse, having never done so in the past.  It's a handsome building, actually, appearing to have been created sometime in the thirties, judging from the architecture. I came upon a balcony, window and deco panel - the balcony at least worthy of an Albert Speer.

At this point I became acutely aware of being alone, and crowded in by so many memories.  I needed to visit the cemetery - a short ride west of town, and up the hill.  There are four parts: The Alma Cemetery, the Holy Family Cemetery, the Saint John Lutheran Cemetery (in two parts), and the Peace UCC Cemetary.  The names, however, are all mostly German: Diepenbrok, Zeckser, Steuwe, and so on.  There they all were, all of those uncles and aunts. 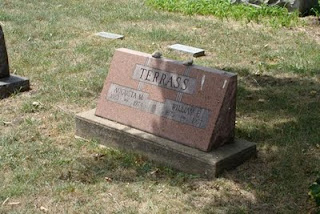 I tried to find my Uncle Edgar and Uncle Milford's (Jiggs') graves, however they eluded me.  I did leave some memorial rocks on the tombstone of my grandmother and grandfather which presides over the burial place of two lost children.  The birds were singing, the breeze was strong, and the grass was swaying.  I looked for some cedar arches (a series of pairs of trees that had been bound together to produces arches) but they had broken loose and were now free.  Sitting just to the left of them was my Aunt Lola's tombstone.
I must make one quick visit before I leave.  I go to the Alma Creamery and buy the cheese that my mother will be expecting to receive when I return home.  She likes the cured curds and that is what I buy as the desk clerk wonders who I am and then discovers that she knows most of my family.  There is a quick drive by the house that my Great Uncle Jake and Great Aunt Pauline lived in, directly across the street from the house that my Grandfather built, now so altered that the only recognizable aspect is the leaded glass window that rides above the living room window.
On the way back I stop off at an overlook that allows one to see the great prairie stretching toward west, the old limestone hills giving way to flat grasslands to extend into Colorado.  It is quite awesome, this display, dappled with thistle, sunflowers, and Queen Anne's lace.  Once these lands covered all of the Midwest, beginning in Michigan.  It was only that limestone in Kansas, the remains of a "great inland sea" as every national park will tell you, that broke the plow and saved the grasslands.
Anna meets me, and we go have lunch - lots of talk about her new position, the classes, the students, the colleagues.  Then we're off to see her new home, still being slowly settled and organized, but it is a home, a cozy one at that. 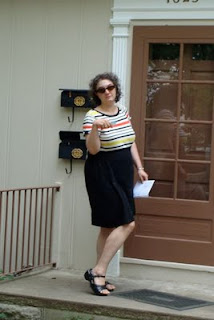 There are, of course, books everywhere, a nice room downstairs for crafts, a dining room, and a kitchen where things are actually happening.  It was very satisfying to me.
It was time, however, to see the campus and the buildings there - offices and classrooms that were now a part of her life.  And there was more limestone, and more carving.  I had wanted to drive over to Wamego to see their limestone buildings again, but it was more important to talk and be together, and soon I would discover beautiful carvings on Anna's campus.
The campus is restful and quiet, full of trees and lots of green grass.  A nice spaziergang was just the order of the day, before heading off to dinner.  I was amazed, that this land, which gave birth to my forbears and to my mother, would now be a part of my daughter's future.  A circle of time coming back in on itself.  I was reminded of the passage in Hebrews (12:1):

"Therefore, since we are surrounded by so great a cloud of witnesses, let us rid ourselves of every burden that clings to us, and persevere in running the race that lies before us."

The photo above is a stone sunflower that graces the building that used to house Tad's Barber Shop.  My father would take me there as a kid, and now I come back to it to behold its beauty.  The sunflower, which finds its way on the side of the roads here, lends beauty and a story to this land.  Its circle of yellow, and its perfection of that orbit reminds me that my past and my daughter's future are somehow tied to the same land - a land that will give nourishment and perspective, and that will release her to be nourishment and a future to others.  It is the perfect closing symbol.
What a wonderful day this has been!
Posted by Michael T. Hiller at 7:56 PM No comments: