The serendipity of life is over-whelming at times.  Randomly, and without warning, the universe supplies a new context – a new resource – a new point of reference.  On a Saturday, some weeks ago, Arthur and I were enjoying brunch at a new restaurant in Dogpatch, Piccino, on Minnesota Street.  Seated next to us were a couple of men, our age, and a few comments were passed, back and forth, over the course of the meal.  A couple of weeks later we were again at Piccino, and again this couple walked in.  This time the shared comments were longer, more in depth, and made more enchanting by our remembrance, each of the other.  We determined that we could not allow the possibility of meeting to be governed by the randomness of our meeting at this restaurant – so another meeting was arranged where we had brunch together. 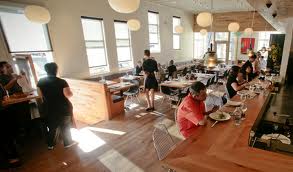 Meeting and talking with Alex and Martin was like spending time with old friends.  We shared family stories, religious stories, San Francisco stories, relationship stories – in short, we shared life.  At the end of our time together we were honored to be invited to be present at Alex’s bar mitzvah later in February.  We accepted it and wrote it down in our household calendar, and wondered what this might bring.
Arthur found a parking place a couple of blocks from the synagogue – so we took it, affording us the opportunity for a leisurely stroll through the Mission Dolores area.  There was architecture to look at, coffee and a croissant (or poppy seed cake with icing) to be had, people to watch, and the warm sunshine along with a rather coolish breeze accompanying us along the way.  Arthur had provided yamakas, one from a synagogue he had visited in Amsterdam, and another from the Jewish Community Center.  However when we entered, we were provided special yamakas made of purple leather, imprinted with Alex’s name and the date of his bar mitzvah.
First we were handed a Siddur, a prayer book.  This one was produced by the congregation itself.  I realized quickly on that I would have to have one of my own.  These were offered to us by Paul, a man who took us in hand, and introduced us to the liturgy, bit by bit.  The starting time, however, soon dissolved as the members of the congregation and guests visited with one another and provided a feeling of belonging and being made welcome
I sat there in my seat and just looked.  There were the faces – smiling, and the conversation.  Tallitim (prayer shawls) were being thrown over shoulders by men and women, some were simple in their strips and fringe, and others were more elaborate with worked collars of silver or gold.  It is about that time, staring at the ark, and the colored glass that surrounded it, that I began to well up.  I mentioned to Arthur that I was becoming emotional.  Image upon image, word upon word, and prayer upon prayer kept me swimming in a sea of remembrance and something like anticipation.  It was wonderful to see a community construct itself, and then to enter the ritual.  The words I knew from a different context, and here they seemed to have the same meaning as they were prayed in Hebrew.  I stumbled along with that.  There was the rhythm of prayer by Paul who was standing next to me.  An Auschwitz survivor who read Torah for us.  As the Torah was carried about the room I looked at the wonder in the eyes of the children. I was keenly aware that I wanted to be, and somehow was, deeply connected to all of this.
As the Kaddish was said, the lives of gay and lesbian people were remembered, and soon Arthur and I were both having difficulty saying the words as a thousand memories or friends who had died came to mind.  I wondered as we said the words, and sang the songs, if the members of the Ringel family, my mother’s mother’s family, had sung these songs and said these words in times past.  I wondered how much of this was in my blood and in the memories that come with birth.  If only people could experience the beauty of shared faith, and the mystery of prayer in another language.  What a morning!
Thank you Alex, and thank you Martin.
Posted by Michael T. Hiller at 6:00 PM 1 comment: