Pilgrimage to Jordan and Israel, Day 2 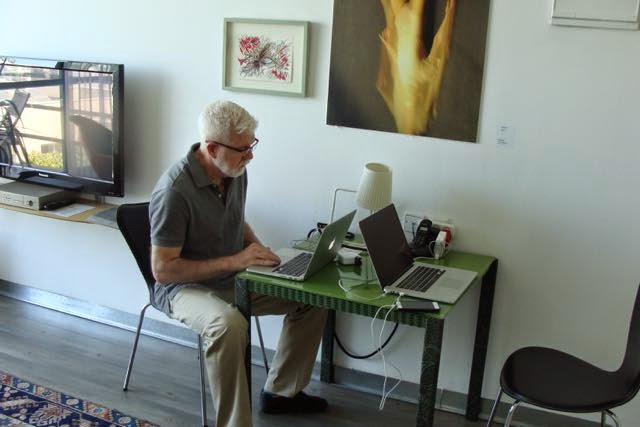 We seemed to have slept late with Arthur finally getting up around 1:00 p.m. We were tired, but wanted to make good on a day in Tel Aviv. I was here 40 years ago, but things seem to have changed. We walked up Rothschild Ave to have lunch at a delightful hotel. I was only adventurous with a “Moroccan Cigar”, but Arthur had Seniyeh: smoked ground meat, bulgar, charred tomatoes, tahini, spiced paprika, smoked eggplant. Apparently it was quite good. 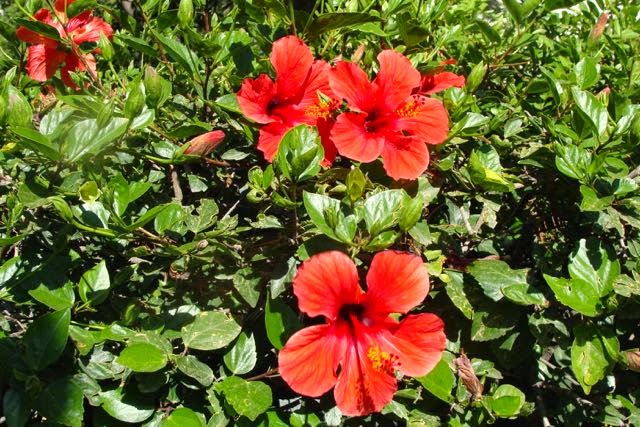 We continued walking up Rothschild to Dizengoff Avenue, which is sort of a commercial strip. It’s always fun to see material and commercial culture on the way. 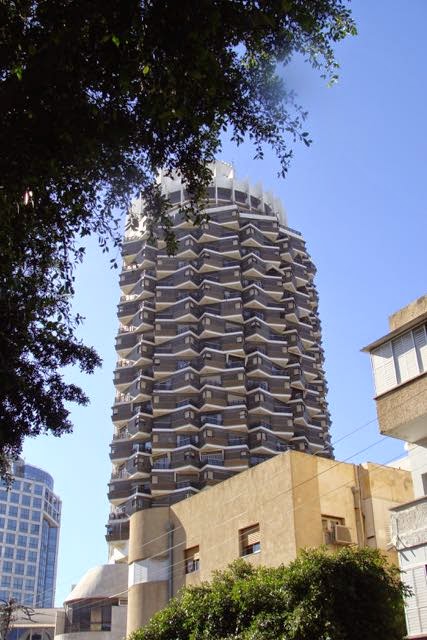 Interesting buildings on the way, but of note are several “Bauhaus” buildings. I don’t think they flow directly out of that school, but were certainly influenced by it, such as the Cinema Esther, and many other buildings. When I was here a long time ago, our guide suggested that we could have some time in Tel Aviv or in Caesarea Maritima. We, of course, shouted Caesarea Maritima. “We can go to Miami any day,” one of us said. Miami and its “art deco” buildings bear a great deal of resemblance to Tel Aviv. 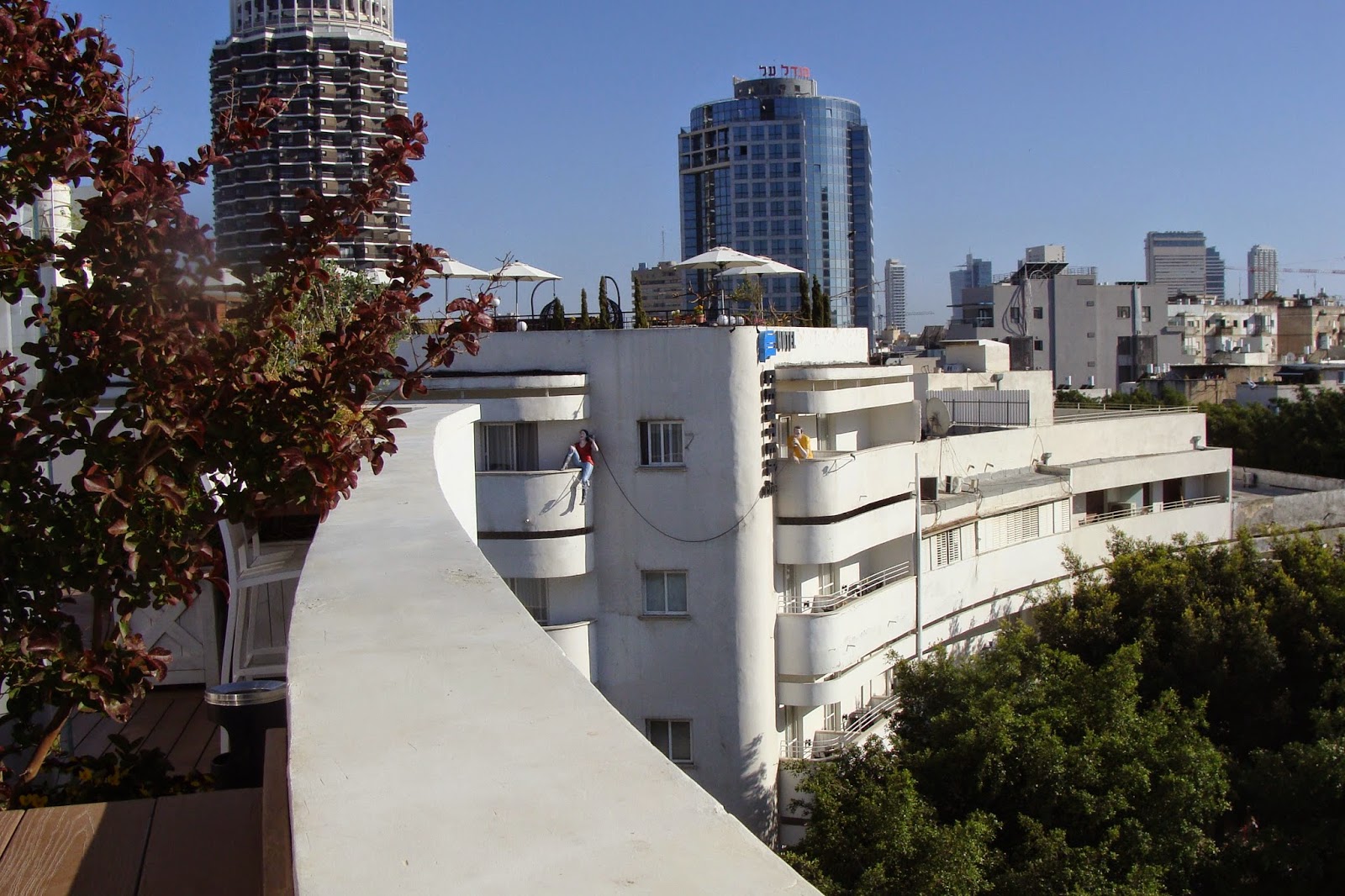 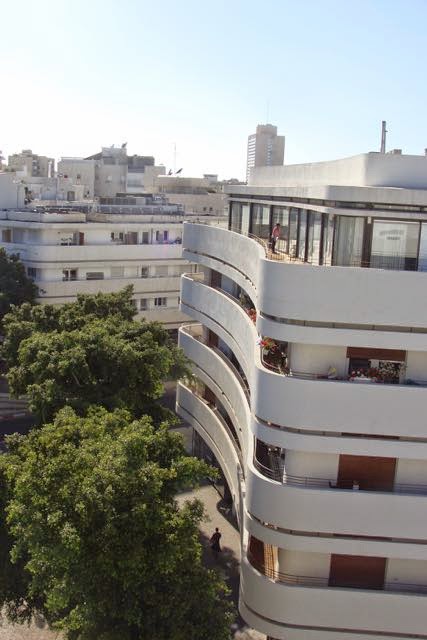 We go to the “Bauhaus Center” at no. 99, and spend some time with books and photographs.  Especially interesting to me is a book on Architecture in Palestine during the British Mandate, making me realize how little I know about that period. Arthur is reading Eugene Rogan’s book, The Fall of the Ottomans, which has a chapter noting what leads up to the mandate. I’ll have to read that and find other materials that can complete whatever I do know about the period and the place. I’m finding that my assumptions about Israel and Palestine are neither helpful nor accurate. Some have been formed by my religious up bringing, and others by my embarrassment at Germany’s behavior during the Nazi period. What I am realizing now is that my tour of Israel in 1975 as a guest of the Israeli government was filled with not a little propaganda, and that I have not gone to test the assumptions driven by that experience. 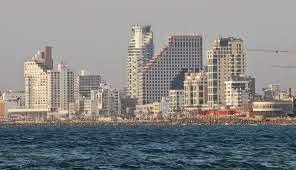 We continue down to the beach. What was once a section of low-rise buildings is gradually being replaced by huge hotels. The city government is rebuilding the whole beachfront, and it was all awash with tourists and bathers. 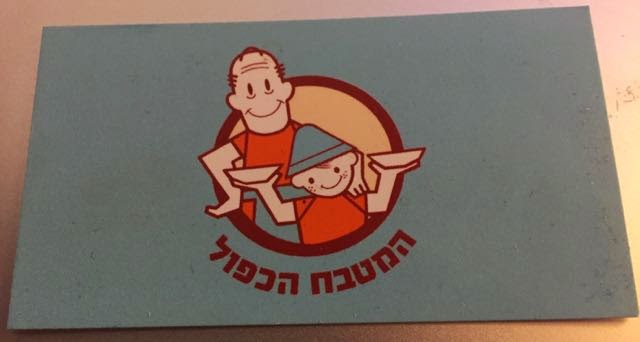 At dinner this evening, at a sidewalk humus restaurant, Arthur asked for a card, and got one. It was all in Hebrew. Earlier in the day he commented on how there was much more Hebrew than he expected, rendering signs and street directions unintelligible. It is one thing to see words which one doesn’t understand, but at least in an alphabet that allows you to pronounce the word. I am having difficulties with modernized Hebrew writing. Some is completely not understandable, others I can at least sound out and make a stab at understanding. At dinner, our first waitress spoke very little English but made a good effort at serving us. She did, however, send over a young woman who spoke English, was born in L.A., and has lived in Israel off and on. She represented my faulty assumption, that Israel was largely populated by European immigrants, such as our driver from the airport who was from Russia and has lived here for 25 years. Unknown to me are the majority (?) who were born here and helped form the culture here. 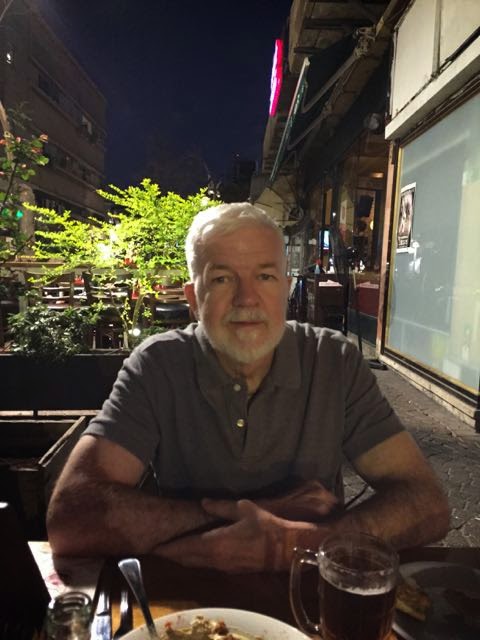 So my assumption that Israel is virtually another part of Europe is false and doesn’t work. Having gotten rid of that assumption, it becomes a more interesting place. It is mid-eastern, with all the cultural joys of that history. 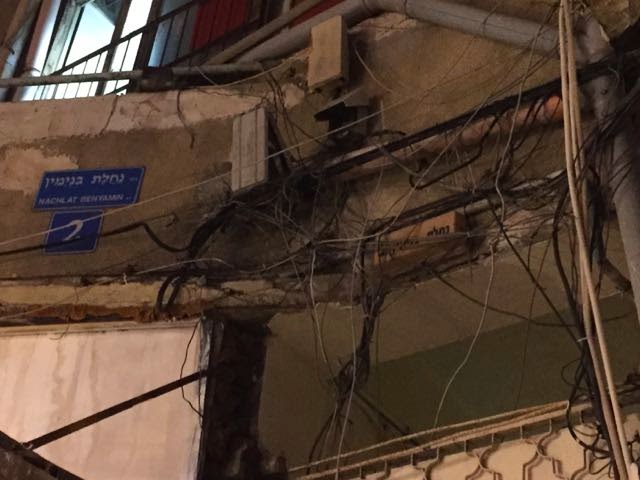 Tel Aviv is, however, a bit shabby. A lot of the “Bauhaus” buildings are simply crumbling, and some are being restored with care. There is graffiti to rival anything else in the world. What was here is coming down to make place for Las Vegas style high rises and hotels. They won’t last long. The steady salt air breeze seems to make for a difficult time for concrete buildings with iron rebar. Also, the buildings seem to follow a pattern that we first saw in Turkey: concrete risers and floors, filled in with masonry. Once the stucco that covers them begins to crumble they are in danger of degrading as well. 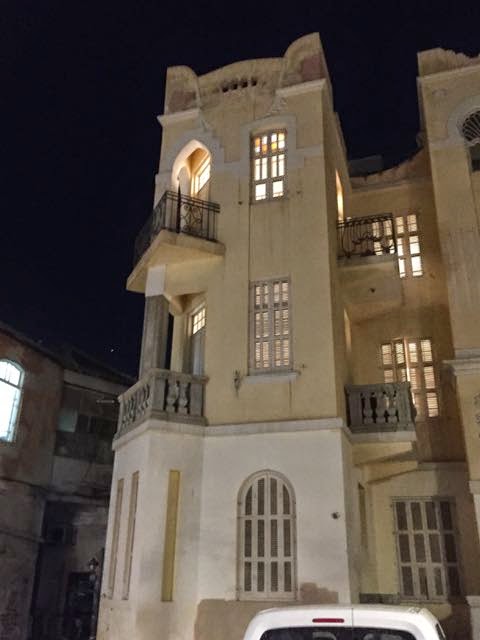 Walking through the Carmel Market after our dinner of humus and falafel, we come upon other buildings that have been carefully maintained. Indeed as we go on to Rothschild again we see marvelously kept new and old buildings – lots of tony restaurants – and banks. 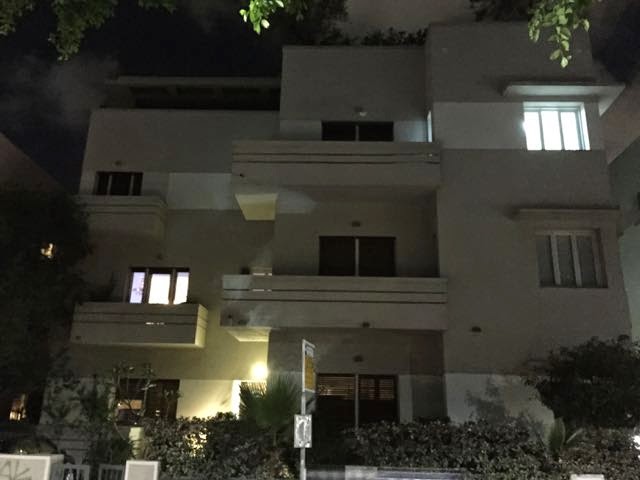 We have had very little time here, but the time we have had has proved to be enlightening and challenging. Now it is time for tonic and lemon, peanuts and sleep.
Posted by Michael T. Hiller at 12:41 PM No comments:

Day One - Pilgrimage to Israel 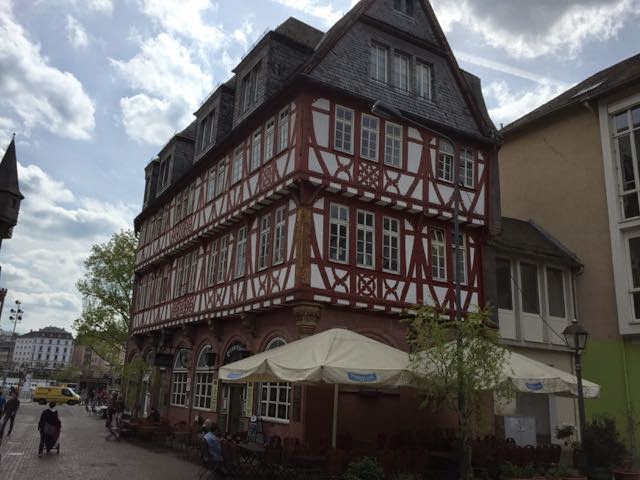 Perhaps it’s good that we are flying through Frankfurt. It will be a touch of the familiar and comfortable before the adventure of Jordan and Israel. We get to the airport much too early and take our time with lunch and wandering around, looking for a new shirt for me having spoiled the one I was wearing at lunch. Pacific News (with T shirts), Hermés (with $1,400 polo shirts), and Burberry (with things much too young for me) are the choices. So its Burberry and a nice black shirt – so unusual for me. Finally we board, and the upgrade that I had requested is granted, so we’re flying backward in Business Class. At least will be able to sleep and do so.

Frankfurt airport is its usual frenetic self, and there are some things to attend to first. We have to get boarding passes and change one of our seats, and that is quickly done. We store our carry-ons and go down to the S-Bahn, catching the 9 into Frankfurt. It’s a quick trip – shorter than I remember. I love European train stations. They’re so full of life, activity, and most of all possibility. We walk up Kaiserstraße (a mixed bag – the area around the Bahnhof seems a bit seedy) to the older part of town. We walk through towers and temples to finance and the Euro. There’s no passion on the streets, however – not like Manhattan, Chicago, or even San Francisco. 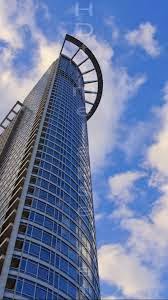 The older part, and there isn’t much of it, has a definite charm. Church bells are ringing and the push of tourists is invigorating. I suggest that we go to one place for lunch, but Arthur finds it too “touristic” and so we move on to a place filled with delightful buildings. 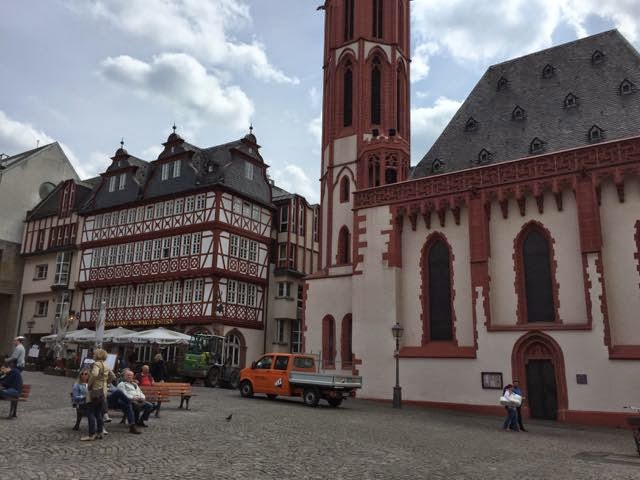 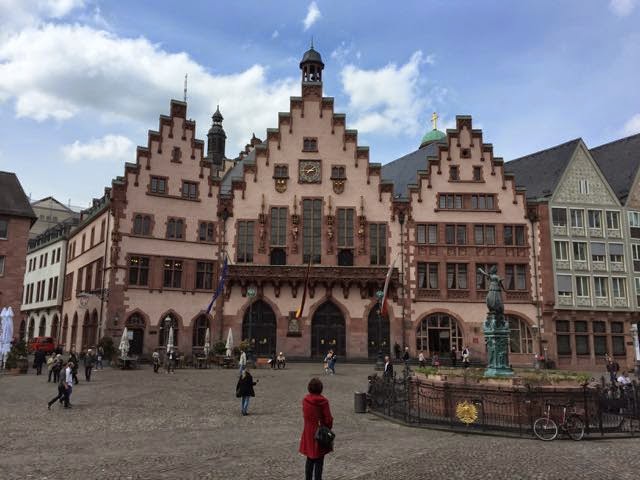 We have a lovely lunch (it’s Spargelzeit) so asparagus, potatoes, and Schnitzel all with Hollandaise. We wander back to the Bahnhof along side the river. There is a great deal of construction, and lots of Asian tourists. Perhaps we need to spend some time in Frankfurt – especially the museums.

At the airport we go through security in order to get into a Lufthansa lounge (messy) and spend some time there. Then we have to go out again, so that we can go through Tel Aviv security – much more rigorous. There is some initial anxiousness when Arthur thinks that he has lost his passport, which, after some moments of search and speaking to customs officials, is found in his back pocket. Then there’s the fun with my C-Pap – security persons always view them with suspicion, and I am in “time-out” until they are assured that it is safe.

We have sit separately since Arthur wanted an aisle seat, so he gets to sit with a bunch of travel agents. I hear his laughter throughout the flight. The flight path takes us over areas of interest to me: München, Salzburg, the Austrian Alps, 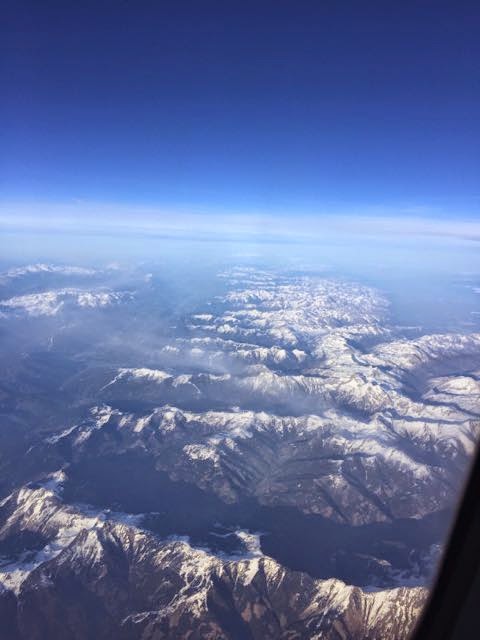 Slovenia, Croatia, Macedonia, Thessaloniki, the expanse of the Aegean ringed with light and Rhodes shining at the end of its island. All is quiet below – and I am thinking of all the difficulty that has embraced these lands. It is not sufficient to view them at 37,000 feet. I will need to go sometime to set my feet on their soil, and see their history with my own eyes. 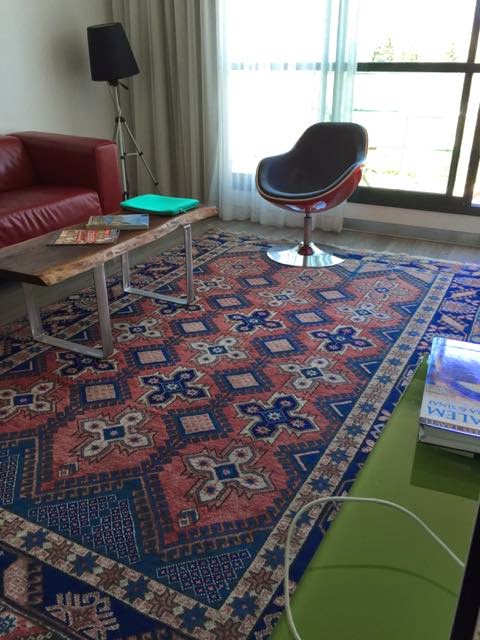 We land in Tel Aviv. Passport control is easy and our driver takes us to our hotel – the Diaghilev. We have fruit and trail mix on our balcony over-looking the towers of Tel Aviv, and then we collapse.
Posted by Michael T. Hiller at 3:54 AM No comments: